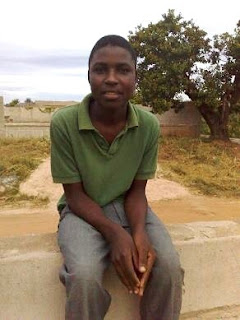 Felix
When Victor was still in the U.S. Felix got very very sick. He was taken to the hospital multiple times and treated for malaria three times. He has now been treated in another clinic and it seems like he is finally recovering. Please pray that his health will return 100% very quickly.

Gabriel was one of the first kids to come to the orphanage. He lost his parents when he was still a baby and some of his siblings tried to throw him into a latrine because they could not take care of him. After being rescued by some neighbors he lived with different relatives who treated him so terribly that he ended up living alone in an abandoned house. When he was ten years old one of his brothers rescued him and 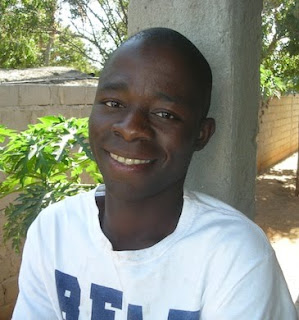 brought him to the orphanage. It is common for people in this part of the world to have 10 siblings. I’m not sure how many siblings Gabriel started out with but last year only one sister and one brother (the one who brought him to the orphanage) were still living. About two months ago Gabriel’s sister passed away and then a few weeks ago his brother died. This has affected Gabriel immensely. It is hard for me to understand what it might feel like to have no living relative. In Mozambican culture the biological family is more obligated to help each other in ways that are not expected in American families. And because families are SO big (as it is normal to have half a dozen or more siblings and even a hundred cousins) – being the only one left is more severe than it would be in a place like the U.S. Gabriel has expressed to Victor that he now feels he has nobody in life. He is very down right now. Please pray that he will know how precious he is to God and that he will feel loved and encouraged by his family in Christ.

Claudia
Claudia has been in the orphanage over seven years but has never really opened up much about some of the experiences she had between the time when her parents died and when she first came here. Just this past week as 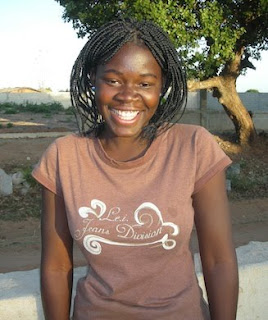 she was fasting, praying, and going through the bible with some other girls, she started saying that she has never stopped feeling worthless since she was treated badly as a girl. The relatives who took her in after the death of her parents were so abusive that she longed to escape them by getting married as soon as she turned 14. They always told her she would never be anything and she still has a hard time not believing that. She also revealed for the first time that she witnessed her brother being brutally beaten and killed. It is amazing that after so many years Claudia is bringing these issues forward and wanting to deal with them. Please pray that God will heal Claudia from all the scars she still carries and that she will be truly experience what God thinks of her.

Our most heartbreaking news just happened last month. There is a family from one of the churches in the village 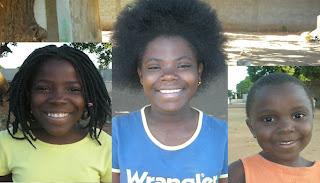 where Victor’s family is from who had four daughters. Their mother died when their house collapsed. After that the youngest three daughters – Bionista, Anabela, and Virginia – were brought to the orphanage. Sometime later the oldest daughter passed away and her baby, Mena, also came to the orphanage. Bionista was full of joy and was extremely friendly – she would brighten any atmosphere and was always organizing games with the younger kids. Everyone knew her laugh because she was always laughing and making other people laugh. But she was also fighting a great battle within herself and eventually had to leave the orphanage when she was about 17. She had nowhere to go so she moved in with Victor’s parents. Last month Bionista got very sick and passed away. Nobody is sure what kind of sickness she had. She was 19 and left behind a one-year-old daughter whose father she never to revealed. Everyone was devastated by Bionista’s death but her younger sisters Anabela and Virginia are especially affected. They have seen their mother and older sisters pass away one-by-one and feel tormented by what has happened in their family. They may even feel that they are “next.” Please pray for this whole family – especially Anabela, Virginia, Mena, and Bionista’s baby who is currently with relatives out in the village. 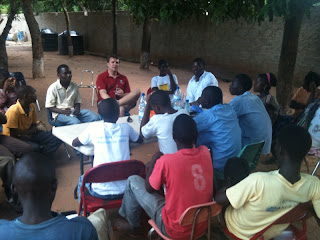 Two friends from the U.S. – Patrick and Steve – visited the orphanage for the second time last week. They were a great encouragement to Victor personally and also to the kids. Patrick told the kids not to let anyone put them down and reminded them that they can do all things through Christ who strengthens them. He told the kids not to ever think they are lower than anyone else, they can achieve their goals in life, and with God they are so valuable. These words were greatly received by the kids, especially considering what some of them have been going through lately. 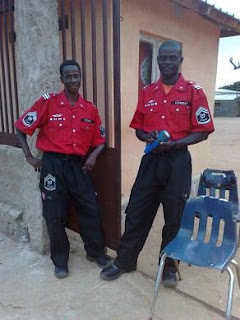 And finally . . . the guards have new uniforms and they like them a lot.

The Orphanage Under The Net 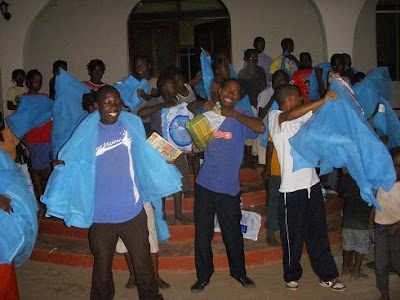 Kids with brand new blue mosquito nets!
After some crazy airline misadventures and lots of friends coming to his rescue, Victor eventually made it back to Nampula in four days. While he was in the U.S. we received some generous donations for new bedding and new mosquito nets. The kids’ nets have really been deteriorating over the years and this has caused more cases of malaria. So as soon as Victor got home he was thrilled to be able to immediately pick up new nets for all the kids! 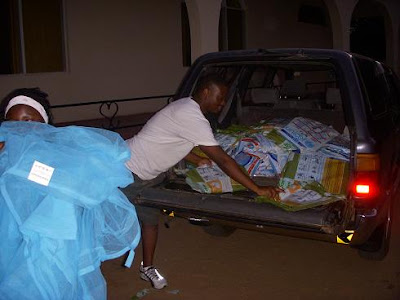 Unloading the nets from the car. 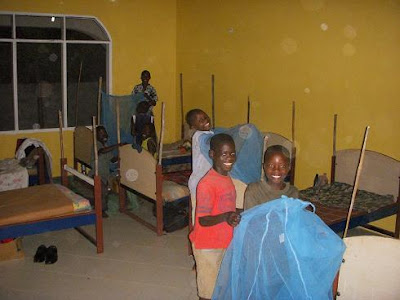 A bamboo stick is attached to each corner of the bed to make a frame that will hold the net up. 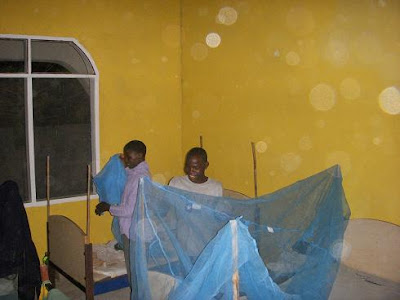 Now everyone will be able to sleep soundly knowing that no mosquito can harm them!
2 comments: 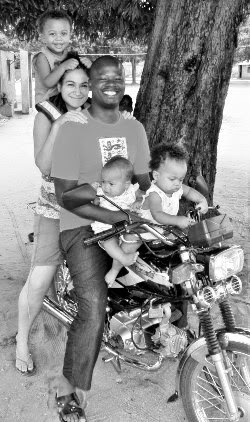 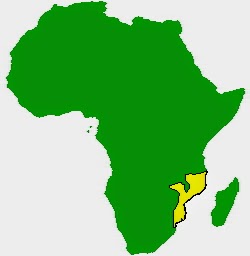 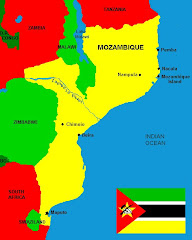